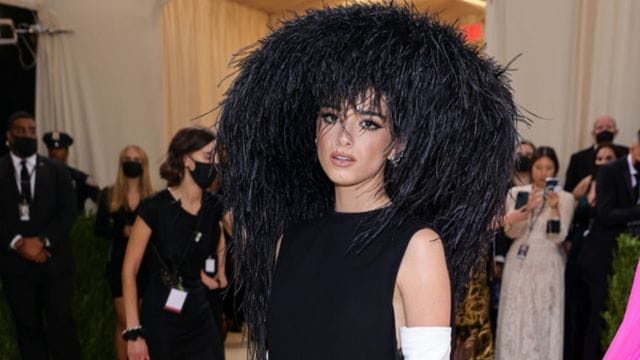 At the 2021 Met Gala, Dixie D’Amelio made her debut wearing a look that was inspired by Audrey Hepburn.

This week saw the occurrence of one of the most well-attended events in history.

Kim Kardashian, Megan Fox, and Kendal Jenner, among others, visited the Metropolitan Museum of Art in New York while dressed by some of the biggest fashion houses in the world.

Also present at the renowned event was TikTok sensation Dixie D’Amelio, whose attire has drawn criticism.

At the Met Gala, Dixie D’amelio

Dixie, a singer, and social media influencer has risen to fame in her own right thanks to her TikTok posts, music videos, and current reality show.

On Hulu’s The D’Amelio Show, which offers a glimpse into the family of two TikTok megastars, Dixie, her sister Charli D’Amelio, and their parents all make appearances.

Dixie made her Met Gala debut with a short black Valentino dress and a massive black feathered headpiece that some have referred to as a “bird’s nest.”

For the afterparty, the TikTok star quickly changed into a different Valentino outfit. She can be seen glancing downward.

Dixie D’Amelio, a singer and creator of TikTok content, made her Met Ball debut this year without her 17-year-old sister Charli D’Amelio, who is too young to attend. The Be Happy singer wore clothes by designer Valentino.

D’Amelio wore an intriguing headdress that is currently trending on the internet. The public’s focus has been rapidly captured by a number of memes about D’Amelio’s attire.

Birds nest of your head
Trash bag as your dress
And knee high socks on your arms
Work it girl @dixiedamelio #MetGala #MetGala2021 pic.twitter.com/P8jvMFa685

was this dixie d’amelio’s inspiration for the met? actually so confused. #MetGala2021 pic.twitter.com/VM9HwtMFgm

dixie damelio at the #MetGala pic.twitter.com/bE6Plu4H1U

Dixie D’Amelio’s outfit-related memes were also widely shared on Twitter. The star of the reality show was likened by many to a rat and a feather. A number of online users were upset that Dixie D’Amelio and Addison Rae were only given invitations to the renowned event because of their TikTok celebrity.

I HAVE BEEN QUIET FOR TOO LONG… and i almost spoiled it a few times but y’all, my girl is literally at the met. THE MET GALA. we’ve spoken about this for a while and how excited she’s been about it. literally so unbelievably proud of you baby, you made it<3 @dixiedamelio

Others criticised the event’s planners for choosing internet celebrities in search of fame over the expected headliners like Zendaya, Katy Perry, Blake Lively, etc.

Why Was Her Sister Charli Not in Attendance?

Charli skipped the 2021 Met Gala due to her advanced age.

All attendees had to be older than 18, even though the TikTok star is only 17 years old. This is because of the fact that “it’s not an appropriate event for people under 18,” according to a Met Gala spokeswoman.

The funny thing about [the rumors] is that I’m actually not old enough to attend the Met Gala, but I have gotten so much backlash about it that I’m like, people, I can’t even go, Charli remarked in an interview with Sirius XM.