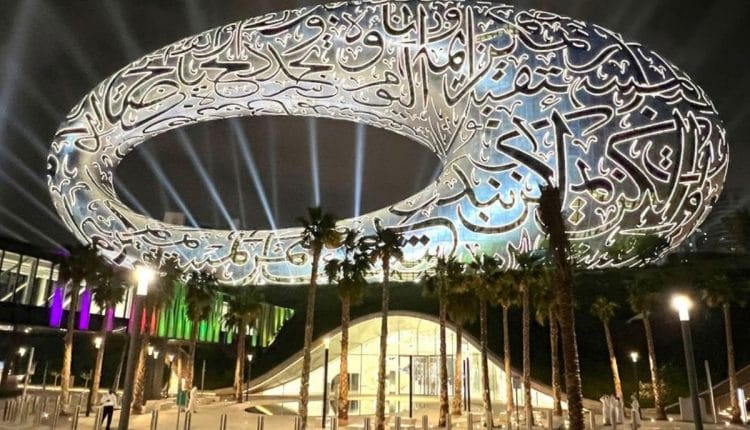 The Museum of the Future is the first of its type in the world. The one-of-a-kind edifice was created to change peoples perceptions of the future. It has multiple immersive future settings that attempt to place visitors in an empowering depiction of the future.

MOTF tackles the future of space travel and living, climate change and ecology, health, wellness, and spirituality, among other topics, with unprecedented themes developed and constructed by the worlds finest product, exhibition, and experience designers.

The Museum of the Future, which stands 77 metres tall and has an immediately recognisable facade, is situated in the centre of Dubai. A fantastic position that is readily accessible to everyone.

The Museum of the Future, which is recognised as one of the most beautiful structures in the world, towers high above Dubais driverless metro system. The seven-story, pillarless tower, which sits on a lawn-like slope and has an oval, hollow structure, has a massive steel façade. The sun rays streaming from the Arabic calligraphy carved on the façade create a fusion of light as you enter the museum. A visit to the museum will leave you with some wonderful recollections since it is dynamic, inventive, and brilliant.

What is the Museum of the Future, exactly?

The Museum of the Futuristic, or MOTF, is an exhibition facility that showcases future concepts. It is one of Dubais cultural marvels. This museum, which is a genuine emblem of innovation and the future, provides a variety of activities that might transport you on a journey into the future.

The museums slogan is See the Future, Create the Future, and it incorporates cutting-edge technology with traditional art forms to reflect Dubais aim to become a futuristic metropolis. The elliptical-shaped structure, which symbolises mankind, the green hill-like mound, which represents the earth, and the emptiness, which represents the unknown future that lies ahead, are the three primary components of the museum.

What Is The Significance of The Museum of The Future?

What is the Location of the Museum of the Future?

Dubai is home to the museum. It stands prominently near the Emirates Towers region and on Sheikh Zayed Road, overlooking the citys expressway and metro system. The museum is situated in a prominent position in Dubai, adjacent to another renowned Dubai landmark, the Burj Khalifa, where life is most vibrant. 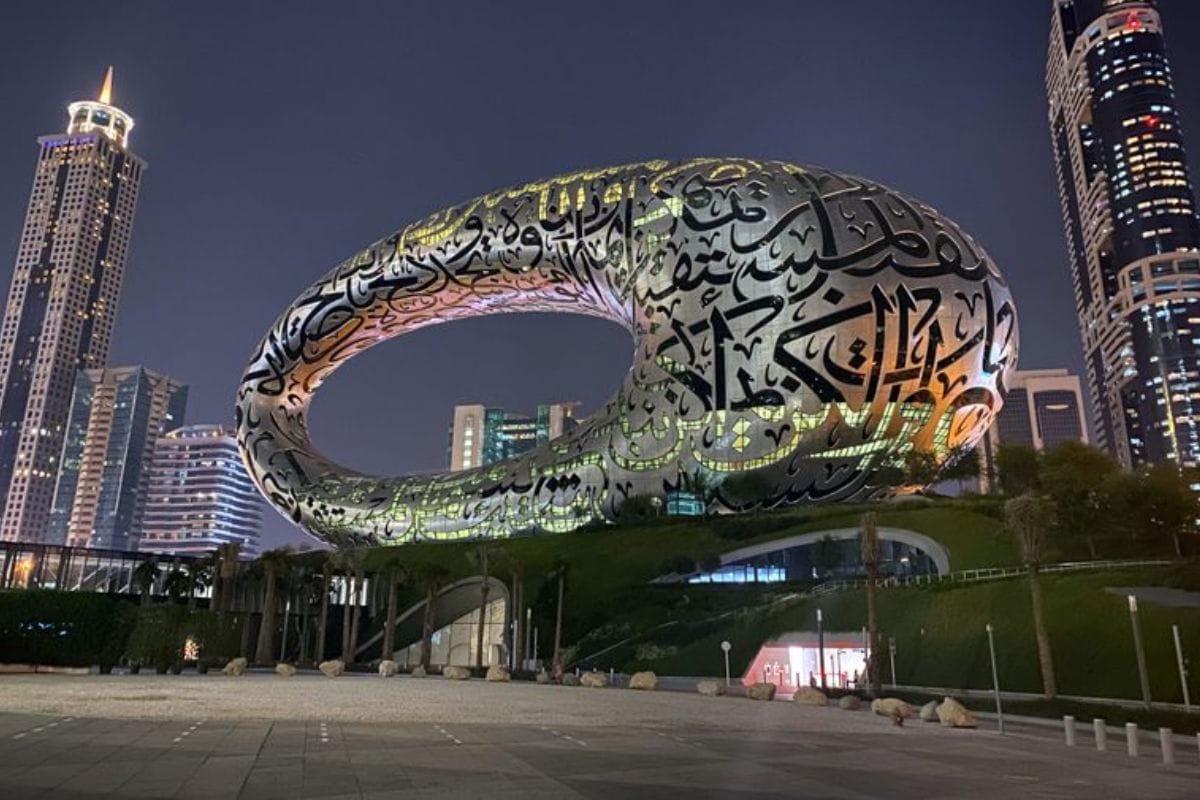 When did the Museum Of The Future first open its doors?

On February 22, 2022, the Museum of the Future (MOTF) opened its doors. Since the construction began in 2015, residents of Dubai have been able to see the development of the project. This year, the museum formally opened, with some particular exhibits on display. The museum will be open daily from 10 a.m. to 6 p.m. for visitors.

The Museum Of The Future has a long and illustrious history

Mohammed bin Rashid Al Maktoum, the Prime Minister of the United Arab Emirates and the ruler of Dubai announced the museums plans in 2015.

The museum’s formal opening ceremony was held on February 22, 2022, after these temporary openings and launches. 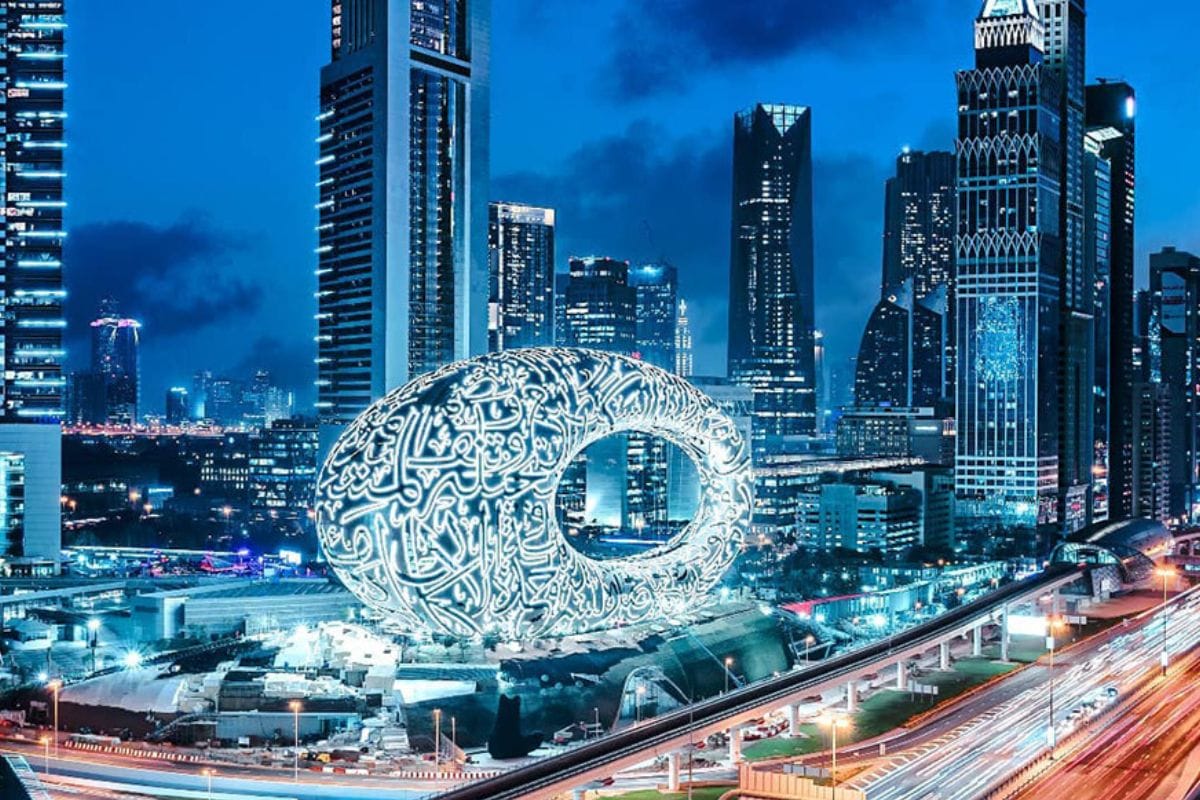 Who Was In Charge Of The Future Museum’s Design?

The museum was designed by Killa Design, a local architectural business run by architect Shaun Killa, a well-known figure in the area of architecture in Dubai. After demonstrating its competence in a museum design competition in 2015, the architecture company was awarded the contract. The project started in June 2016, with BuroHappold Engineering of the United Kingdom being tasked with bringing Killas vision to life.

The buildings façade and interior are both meant to take your breath away! The buildings construction prompted the designers to push all architectural limits, with a pillar-less structure, stainless steel exteriors, and calligraphy panels.

The construction of the building is elliptical, and the front includes exquisite windows in which the poetry of Dubais ruler Sheikh Mohammed is carved in Arabic calligraphy. Buro Happold and the design company developed new parametric modeling technologies, such as the growth algorithm, which is utilized to digitally build the steel structure, to bring Killa Designs concept to life.
The buildings diagrid structure includes roughly 2,400 diagonally crossing steel elements, and the steelwork took the engineers around 14 months to complete. 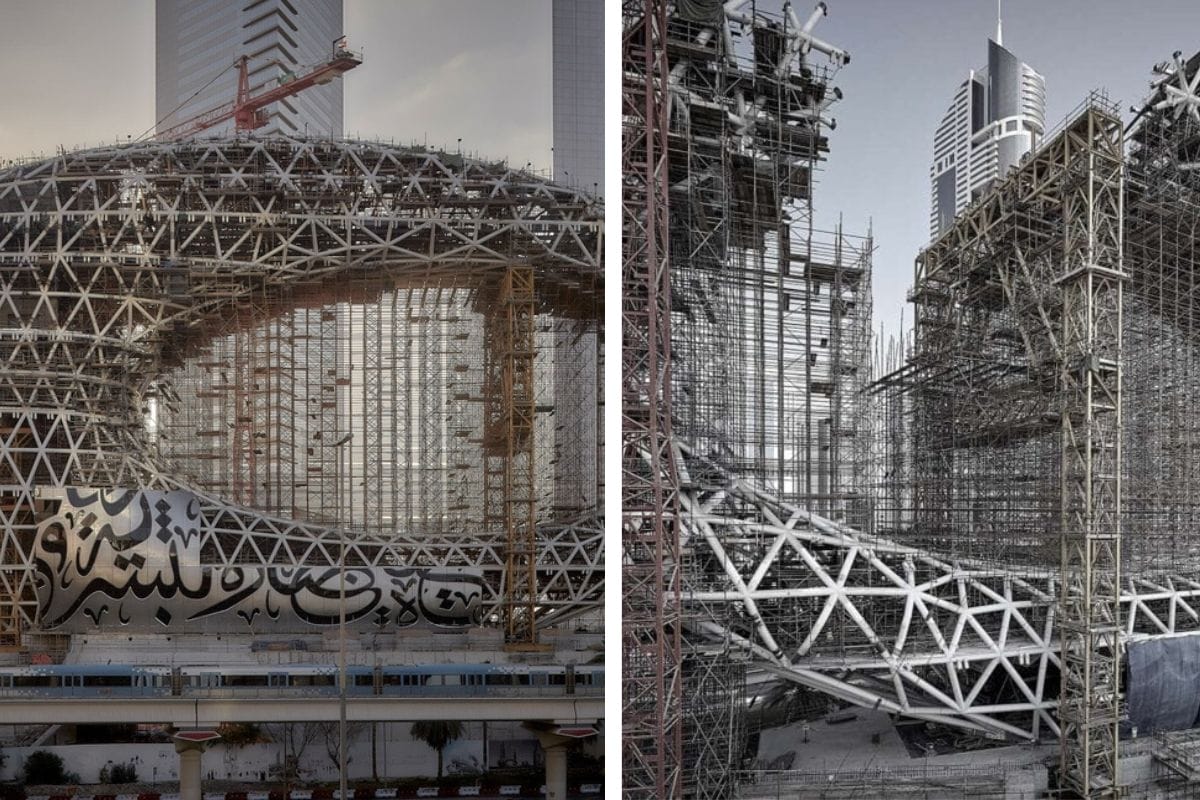 Notable Buildings and Designs from the Museum of the Future:

What Does Calligraphy Mean in the Museum Of The Future?

The Arabic calligraphy carved on the buildings front is one of its most appealing elements. Mattar bin Lahej, a well-known Emirati artist, created it. These motivational Arabic phrases were extracted from poetry authored by HH Sheikh Mohammed Bin Rashid Al Maktoum.

The Museum of the Future: What Can You Expect to See There?

How Can You Get Entry Into The Museum Of Future?

Visitors were welcomed to the Museum of the Future after its official inauguration on February 22, 2022. Since its launch, it has been attracting enormous crowds every day because of the many exciting events and exhibits it hosts, as well as the cutting-edge technology it showcases. 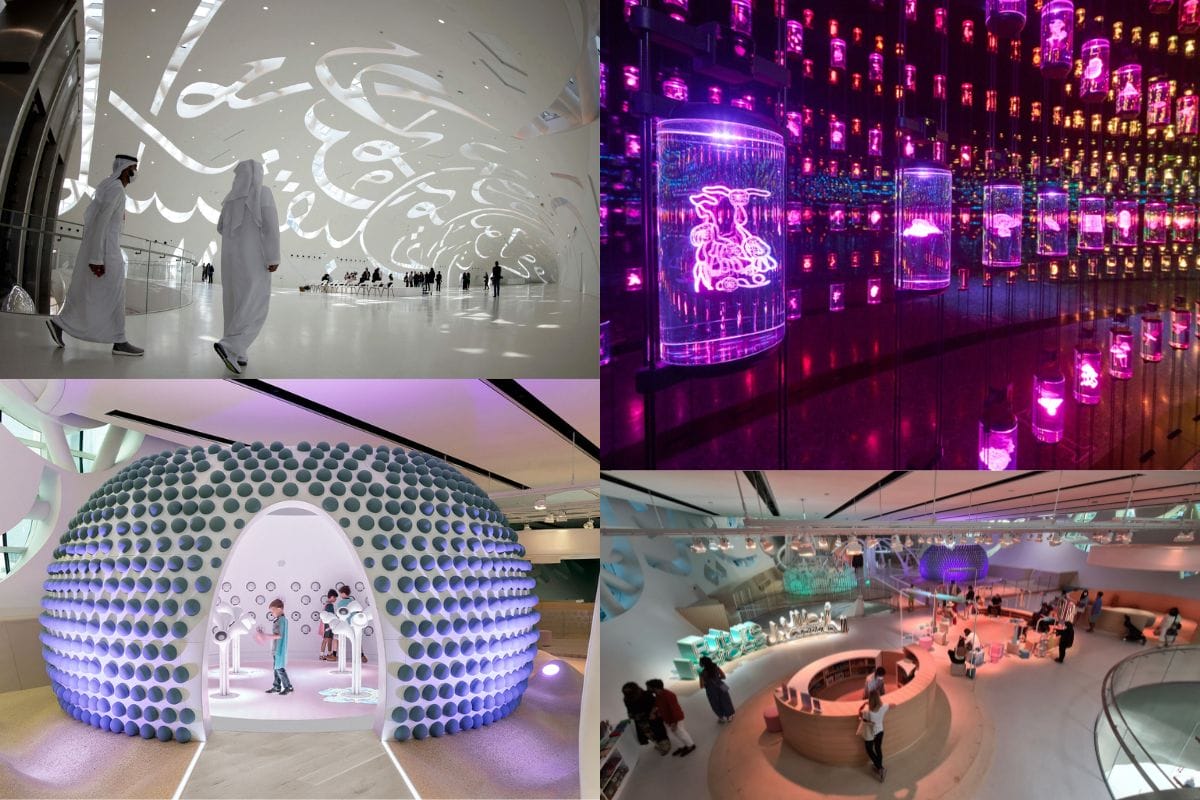 If you’re interested in the future, why not check out the exhibitions and experiences at the Museum of the Future?

When you go inside the Museum of the Future, its like youve been transported to the year 2071. The exhibits are geared toward stunning, dazzling, and enchanting visitors with their state-of-the-art technology and eye-popping visuals. Its a great spot to reflect on your life thus far and draw ideas for how to improve and enhance your future experiences there. Space travel, climate change, spirituality, health, healing, and eco-friendly practices are just some of the themes explored.

If you go to the Museum of the Future, you should definitely check out Journey to the Future.

Its 3,000 square meters of display space are meant to take you forward in time to 2071, the centennial of the formation of the United Arab Emirates. Each of the three stories has its own chapter. Space exploration, biotechnology, personal wellness, ecological restoration, etc. are only a few of the issues explored in the show.