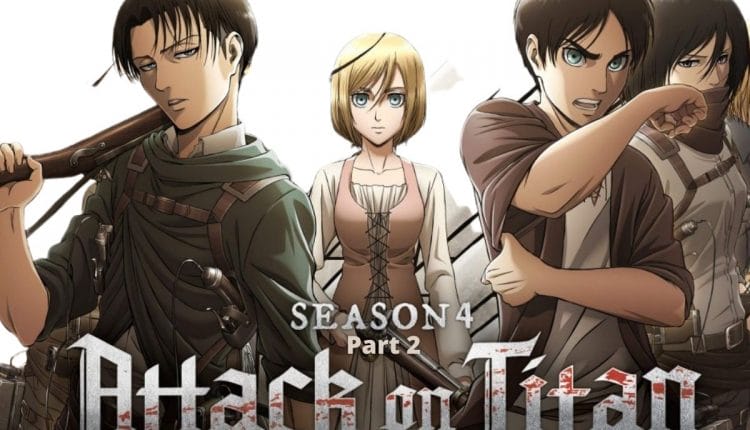 Will There Be Attack on Titan Season 4 Part 2? See All The Updates!

Even though the grand Titan alliance has been formed, it is unlikely that this alliance would function well. Since they were formerly enemies, those grievances arent easily forgotten. However, the show has managed to surprise us in the past.

Now that all of the participants are in position, the plan to prevent Eren from levelling the Earth must be implemented. Part 4 Episode 9 (also known as Season 4 Episode 25 or 84) of Attack on Titan Season 4 Part 2 approaches its finish.

Were anticipating a thrilling conclusion to the season. Of course, theres always the question of the Colossal Titans army on its way to destroy the world. You wont want to miss the bleak-yet-action-packed ending of Attack on Titan Season 4 Part 2 Episode 11 (also known as Season 4 Episode 27 or Episode 86 overall).

Attack on Titan is a favourite among anime lovers all over the world, especially since it is based on a manga by Hajime Isayama of the same name. The series began as a deadly but straightforward tale of Man vs Titan, but it evolved into something much darker and darker.

Throughout much of 2021, fans eagerly await Eren Jaegers fate and the outcome of the War for Paradis. There are numerous theories and questions. Attack on Titan is in its final season, and this is the second half of the final season.

Episode 26 of Attack on Titan Season 4 will debut on March 13, 2022, and is titled Traitor. The episode will be available on Hulu, Crunchyroll, and Funimation Entertainment. The first half of Season 4 was based from Chapters 91-116. We want to see all remaining chapters (117 to 139) of the manga in the last episode now that part 2 has been confirmed as the final anime episode.

On March 14, it will be 12:05 a.m. in Japan. Only a few Japanese broadcasters are affected by this. The premiere of the next new episode of Attack on Titan (Season 4, Episode 28: The Dawn of Humanity) in the United States will be one week later, on Sunday, April 3, 2022. (and in Japan on Monday, April 4).

When Will Attack on Titan Season 4 Part 2 Episode 11 Be Available in Dubbed Version?

Youll have to wait a little longer if you want to watch Attack on Titan with English dubbing - that is, English voice performers recording over the original phrases. Crunchyroll and Funimation began airing the dub for Attack on Titan Season 4 Part 2 on February 13. On April 24, the dubbed version of Retrospective is set to air.

What Is the Attack on Titan Season 4 Part 2 Episode 11 Release Time?

Total No. Of Episodes In Season 4 Part 2:

Episodes from Season 4 Part 2 of Attack on Titan

The dub for Attack on Titan will air with a slight delay, but it will happen eventually. Attack on Titan Season 4 Part 2 dubs with English performers dubbing the original Japanese lines debuted on Crunchyroll and Funimation on February 13. Night of the End is set to air on April 10th, according to the shows weekly release schedule.

Season 4, Part 1 ended with Marleys soldiers attacking or killing Eren from the sky in a glimpse of the Shiganshina District. The Titans are about to engage in an epic battle, and Eren is the centre of force to rely on.

Things will get even more complicated and dark in the next section. After killing innocent citizens in an attack, his old friends turned against Eren Yeager. To stop him, he was forced to join forces with them. Because a major war is about to begin, many people regard the former hero as their greatest foe.

In the second half of Attack of Titan Season 4, there will be no unanswered questions. Fans of the anime series are also ecstatic because the second instalment marks the conclusion of one of the most popular series.

New episodes of Attack on Titan premiere on Hulu (for $6.99/month) on Sunday afternoons, as well as Crunchyroll and Funimation on Sundays at 3:45 p.m. ET/2:45 p.m. CT (but the series finale will be delayed a week). With an active Crunchyroll (beginning at $7.99) or Funimation (starting at $5.99) subscription, you can also watch AOT Season 4 online. For qualifying subscribers, both programmes provide a free trial period.

Thats All About Season 4 Of Attack On Titan. The Battle of Titan is nearly over. The narrative has yet to be resolved, the villain has yet to be defeated, and the story has yet to be nicely wrapped up. Were left on a major cliffhanger, with a strong want to find out what happens next.

You can read the manga, but youll be losing out on Studio MAPPAs fantastic work throughout the season, as well as Yuki Kajis and the rest of the casts incredible voice acting and the shows legendary musical score.